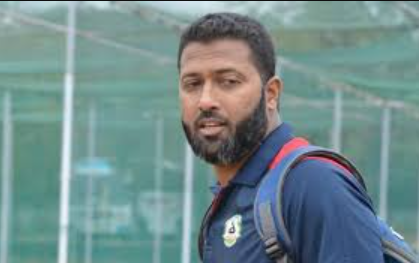 Former Test opener Wasim Jaffer ha urged the die-hard Indian cricket fans not to lose hearts after tasting bitter defeat at the hands of a spirited England team in the first Test match at the MA Chidambaram Stadium, Chennai.

Chasing a mammoth total of 420, the Indian batsmen barring opener Subman Gill (50), and, skipper Virat Kohli (72) could not offer much resistance as the hosts were bundled out for a paltry 192.

Taking to the micro-blogging site, Jaffer requested all the Indian cricket fans to not lose hope. Giving further clarification on the same, the former Mumbai skipper cited the example of Team India’s remarkable comeback in the four-match Test series against Australia Down Under where they registered a historic 2-1 win after a humiliating loss in the series-opener at the Adelaide Oval that was played under lights.

Giving another example, the ex-Ranji Trophy winner mentioned that last time the Indian team lost the first test of a home series, they ended up winning the series.

Jaffer is referring to the 2016/17 home series where Australia ended up drawing first blood against the then top-ranked Test side on a rank-turner in Pune. However, Virat Kohli & Co. showed great courage and determination to register a famous win in the next Test match that was played in Bangalore. Meanwhile, the third Test in Ranchi ended in a stalemate and the hosts sealed the four-match series 2-1 by having the last laugh in the decider at Dharamsala.

The second Test match will also be played at the Chepauk Stadium from February 13-17 and India will be looking to put this loss behind and come out all guns blazing to stay alive in the four-match series.

India were comprehensively beaten by 227 runs by England in the first of the four-match Test series at the MA Chidambaram Stadium in Chennai on Tuesday after they were bundled out for a paltry 192 chasing a mammoth target of 420 as skipper Virat Kohli top-scored for the hosts with 72.

England had everything going their way right from the toss to the end of the match. After opting to bat first, England posted a mammoth 578 riding on the back of a sensational double ton by Joe Root. In response, India were bowled out for 337, thus conceding a massive 241-run lead.

Joe Root & Co. decided against enforcing follow-on as they scored 178 and set India a target of 420. The Virat Kohli-led side was never really in the chase as they kept losing wickets regularly and were eventually dismissed for 192, thus handing the visitors a comprehensive win.