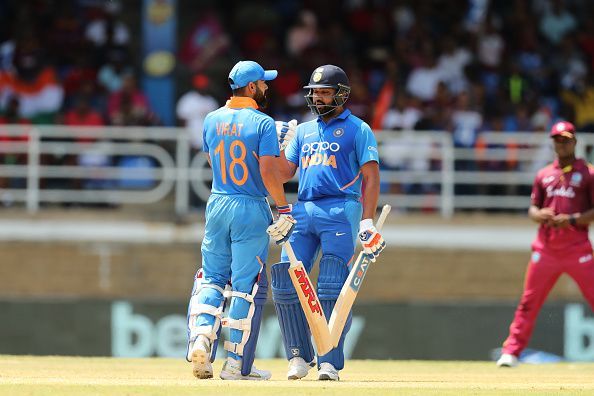 The tussle for the leading run-getter in T20 internationals between Virat Kohli and Rohit Sharma will resume when India face South Africa in the third and final T20 at the M. Chinnaswamy Stadium in Bengaluru.

Indian skipper Kohli overtook Rohit in the last match en route to his unbeaten 72, which led India to a seven-wicket triumph at Mohali. Kohli now has 2441 runs from 71 T20s. However, Rohit, who was the leading run-scorer in the format before the second T20, is only slightly behind, with 2434 runs in 97 matches.

Whoever performs better on Sunday is likely to end up on top of the leading run-scorers chart in T20s. For the record, Rohit made a run-a-ball 12 at Mohali, a rare failure for him, as a result of which he moved to the second spot in the run-getters list.

Both Kohli and Rohit have exceptional records in the T20 format. The Indian captain has played 71 games in which he has scored 22 fifties at an average of 50.85 and a strike rate of 135.91. In fact, Kohli is the only batsman in the world to average 50 in all three formats of the game.

Rohit, in comparison, averages a relatively low 32.45. However, he has four centuries to his name at a strike rate of 136.66. In fact, he is among the select band of players to have scored hundreds in all three forms of the game.

Under the present scenario, it seems the top run-getter crown will keep oscillating between India’s captain and vice-captain, but going by the form, it could be the former who keeps the record by the end of the series.

India go into the third T20 against the Proteas as favourites after a clinical performance in the second game at Mohali. Apart from yet another captain’s knock from Kohli, opener Shikhar Dhawan got some much-needed runs, making 40 from 31 balls. His promising innings was cut short by a spectacular one-handed catch by David Miller, which left even Kohli stunned.

There were impressive performances with the ball as well for India as Deepak Chahar claimed 2 for 22, while Navdeep Saini, Ravindra Jadeja and Hardik Pandya all picked up a wicket apiece. The big worry for India as of now is the form of Rishabh Pant, who managed only four in the second T20 before perishing to a poor stroke.

South Africa, on the other hand, will need to maximise their gains when they are ahead. At Mohali, they were well placed at 88 for 1 in the 12th over but completely lost their way after skipper Quinton de Kock was dismissed for 52.

Temba Bavuma’s crawl (49 from 43) hurt them and the batsman was candid enough to take the blame post the defeat. Meanwhile, better consistency will definitely be expected from the now-experienced David Miller.