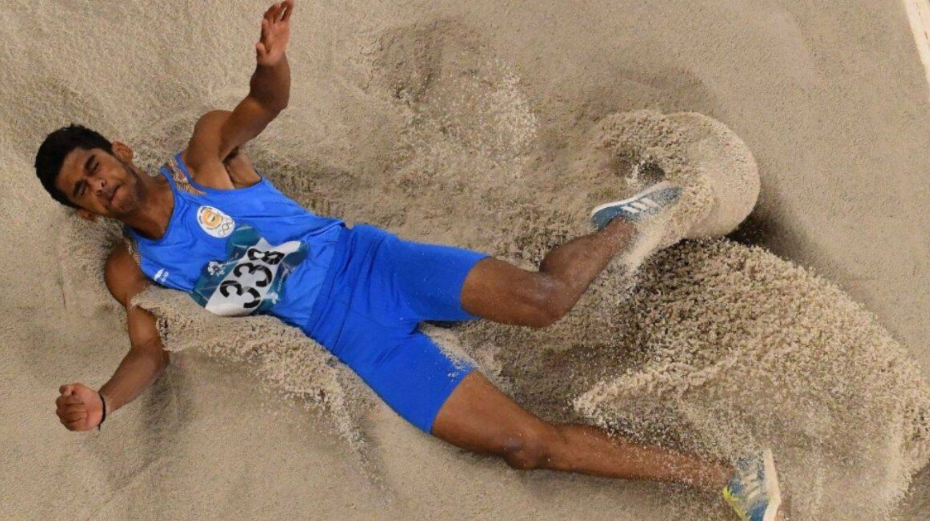 Much to his relief the white flag was raised and Sreeshankar let out a scream of joy and pumped his fists. It is rare for the youngster from Palakkad district, Kerala, to show any emotion. But the occasion called for it.

The moment long jumper Sreeshankar Murali completed his fifth jump, he had a gut feeling of having crossed the Olympic qualifying standard of 8.22 metres. The 21-year-old looked anxiously at the official to check if he had fouled.

Much to his relief the white flag was raised and Sreeshankar let out a scream of joy and pumped his fists. It is rare for the youngster from Palakkad district, Kerala, to show any emotion. But the occasion called for it.

His fifth and best attempt of 8.26m earned him a spot in the Tokyo Olympics. He also bettered his previous national mark of 8.20m.

“While I was landing I saw myself go past the Olympic qualifying marker placed on the side. My only fear was whether I had committed a foul or not,” Sreeshankar told. His fear was unfounded. The wiry BSc mathematics student was in great rhythm on Tuesday.

Forget committing a foul, all his five jumps were 8 metre-plus.

Sreeshankar credited the feat to his father and coach S Murali, who was beaming. “When he was just 1O, he created an email account with a combination of his name and the word ‘Olympics’ in it. Maybe he will have to update that after he goes to Tokyo,” Murali said.

But it hasn’t been easy for the duo, especially with constant barbs aimed at Sreeshankar for being reluctant to not train with anyone else other than his father.

“I know a lot of people were saying things like 8.20m is my peak and that I can’t go any further while training under my father. All those comments charged me up actually. I came here and wanted to prove that I am much better than that. I know my father isn’t a qualified coach but his approach is the best. Everything in my training is tailor-made and specific. He knows my mentality and body better than me,” said Sreeshankar whose mother KS Bijimol is also a former international-level athlete.

Despite the huge jump, the father-son duo was quick to brush off talks of a big result in Tokyo. Tuesday’s result was just a huge weight off their shoulders. They know they are still miles away from the top stars on the global stage. Father Murali says his son would be ultimately aiming for a podium spot at the Paris Olympics in 2024.

“I don’t want to be overconfident. 8.26m is just one milestone on the road. I am happy but there is no reason to be content. There are jumpers who are doing extremely well especially on the American collegiate circuit. If I have to make an impact on the global level then I will have to raise my standards,” said Sreeshankar.

On his return to competition in the second leg of the Indian Grand Prix last month, Sreeshankar wasn’t able to get the explosiveness in his jumps despite breaching the 8m mark. The restless youngster went back to the hotel room to ‘pester his father’ and know where he was going wrong.

“He said I’m stupid in a jovial tone. He said I am scared of approaching the board and that I should attack it. I tried to remove that fear today from the first jump itself and I saw a constant improvement,” he said.

Another minor adjustment Sreeshankar made was to increase his run-up by a metre and a half to add a little more pace. “More distance means more speed in my run-up. When I came here for the previous competitions I realised I had reduced my run up compared to what I did in practice back home. Today I pushed back the marker and it helped”

In the women’s 100m final, the hype around a duel between the national record holder Dutee Chand and world junior medalist (400 metres) Hima Das fizzled out after the latter got disqualified for a foul start. The highlight of the race was Dhanalakshmi’s spirited run of 11.38s that helped her beat 2018 Asian Games double silver medallist Dutee (11.58s) to the gold.

The Tamil Nadu runner has been performing consistently and had clocked impressive timings in the heats as well. For Dhanalakshmi, beating the finest sprinter in the country doesn’t come as a surprise.

“I have been working hard in the last few years and this was expected. I knew all the attention was on Dutee and Hima and that motivated me to do even better. I am glad I won and I would like to dedicate this to my father who is no more.”