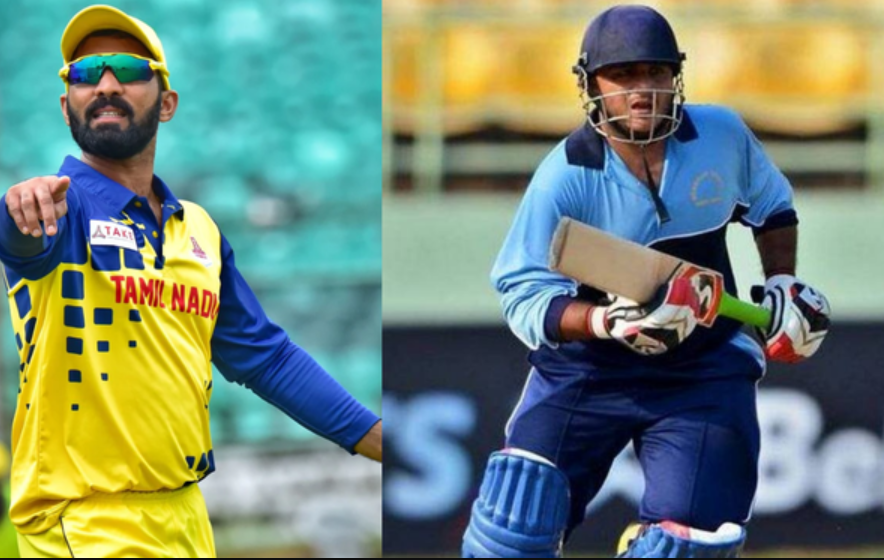 That’s all for tonight, folks. Hope to see you soon with more cricket action!

Dinesh Karthik is presented the trophy by BCCI secretary Jay Shah and he is joined by his Tamil Nadu teammates in the celebrations!

The result: An Tamil Nadu contingent steams onto the field. Skipper Dinesh Karthik is all smiles as he leads Tamil Nadu to the title after 14 years! Credits to Baroda for a sizzling run into the final but tonight was just not theirs as they were steam-rolled by a dominant Tamil Nadu outfit.

In a game won by a sizzling display by Tamil Nadu’s spin bowlers, the move to bring in Manimaran Siddharth for the final game of the tournament paid rich dividends as the left-arm spinner cracked open the Baroda side with a sensational spell of 4-0-20-4 and became just the second spinner to pick a four-wicket haul in a SMAT final!

Tamil Nadu 123/3 after 18 overs – Shahrukh cracks a sizzling boundary through covers and that’s it! Tamil Nadu is the SMAT 2021 champion!!

Tamil Nadu needs 15 from three overs. Will Shahrukh Khan and Aparajith wrap things up in this over?

TN needs 20 off 3.5 overs – OUT! Dinesh Karthik has thrown it away. Atit Sheth rushes it onto the skipper who mistimes the pull and the midwicket fielder completes the catch.  Dinesh Karthik c Solanki b Sheth 22 (16b 3×4 0x6)

TN 89/2 after 15 overs: 32 off the last five! With Karthik and Aparajith at the crease, it’s just a matter of few overs before the match is done and dusted. Baroda, is out of options and could only hope of a slip-up from TN which is improbable.

TN 69/2 after 12 overs: OUT!  Some respite for Baroda as Pathan removes Nishanth. The left-hander flicks the ball straight to the deep fine leg fielder and Bhargav Bhatt slides in to complete the catch. Nishanth departs after acing the anchor role at one end and has put the match in the kitty for TN.  C Hari Nishanth c Bhatt b Pathan 35 (38b 3×4 1×6)

TN 61/1 after 10 overs: Tamil Nadu is halfway through their quest to the title. There has been nothing conducive in the pitch for the Baroda spinners and skipper Devdhar has struggled to rotate his bowlers to snatch the breakthrough. Aparajith and Nishanth have carried the chase with ease.

TN 51/1 after 8 overs: Nishanth has unsettled Kakade with a massive shot down the ground for six as the match quickly slips away with the bowlers looking hardly penetrative against the batsmen.

TN 38/1 after 6 overs: Tamil Nadu has started without a fuss barring the excellent delivery copped by Jagadeesan. Baroda has failed to chip in with a few wickets and they would certainly require a couple of them in the next few overs to have any chance in this game.

TN 26/1 after 4 overs: OUT! The tournament’s leading scorer departs as Lukman Meriwala continues to impress. Meriwala peppers the short ball and strangles Jagadeesan in the crease. He mistimes the pull and is caught by Kakade at mid-wicket. Narayan Jagadeesan c Kakade b Meriwala 14 (12b 3×4 0x6)

TN 21/0 after 3 overs: The spinner Bhatt is into the attack and the TN openers have employed the sweep to counter the spin. Adding insult to injury is the lousy fielding at the midwicket boundary which gives a boundary that was never in the offing.

TN 11/0 after 2 overs: An excellent over from Meriwala is spoilt of the final ball as Hari Nishanth finally makes some room to hit a blazing four through point.

TN 5/0 after 1 over: Sheth concedes the lone boundary to Nishanth who eases it through the covers. The paceman has attacked the stumps and prompted the TN openers to start cautiously.

The chase is underway.  TN openers Jagadeesan and Hari Nishanth at the middle. Atit Sheth with the ball.

Baroda 120/9 after 20 overs: OUT! Solanki departs after lone-waging 49. He misses out on a well-deserved in a bid to retain strike of a non-existent second run and is run out. Solanki’s level-headed knock has however, given Baroda something to bowl at in this final.

M. Siddharth who featured in his first game, ripped apart the Baroda top-order in a sensational spell of 4/20 as Dinesh Karthik’s men launched an all-out spin attack with 15 overs shared among the spinners.  Their excellent effort means that Tamil Nadu needs 121 to win the Syed Mushtaq Ali Trophy for the second time.

Baroda 107/7 after 19 overs:  Solanki takes Baroda past 100! Sheth falls to Sonu Yadav but Solanki powers two massive sixes – one a spitting image of a perfect helicopter shot and Baroda can breathe slightly in this game.

Baroda 93/6 after 18 overs: First six for Baroda! And it comes with two overs to spare. Sheth has connected the slog sweep with perfection as Murugan Ashwin concedes 11 runs in his final over.

Baroda 82/6 after 17 overs: Sheth makes a move as he fetches two boundaries. Streaky but valuable as Baroda will take anything that comes its way tonight.

71/6 after 16 overs. This must be it for Baroda before Solanki and Sheth go for everything.

Baroda 61/6 after 14 overs: Spin or seam, Baroda has no hopes of shifting the gears. A resolute Solanki has made it clear to rotate strike and take the innings as deep as possible before launching an attack.

After 13 overs of spin, we have a hint from the seam attack with Sonu Yadav.

Baroda 46/6 after 11 overs: Solanki has watched his side move to shambles from one end. Another quiet over chipped in from Siddharth who finishes an excellent spell of 4-0-20-4!

Baroda 36/6 after 9 overs: Two wickets more to Siddharth’s tally! What a move this has been from Tamil Nadu to bring the left-armer into the side. He has single-handedly ripped apart the Baroda batting order. Abhimanyusingh Rajput gifts a dolly to the bowler of his own bowling and the key man Kartik Kakade departs soon after.  Siddarth went wide off the crease once again and darted in another which jags back to the stumpts.  Abhimanyusingh Rajput c & b Siddharth 2 (8b), Kartik Kakade b Siddharth 4 (4b 1×4 0x6)

Baroda 28/4 after 7 overs: OUT! This is SHOCKING stuff from Baroda. A needless, risky single is attempted by Solanki and new man Bhanu Pania. Solanki saddles it to Arun Karthick and an excellent throw to Karthik behind the stumps was enough to remove Pania who ran to the danger. Baroda slumps further and is playing itself into more trouble. Bhanu Pania run out (Arun/†Karthik) 0 (1b 0x4 0x6)

Baroda 28/3 after 6 overs: OUT! Siddharth is on a roll in his first game of the season! He fires in a quick, deceptive arm ball to Smit Patel who is puzzled as he moves to the backfoot. The ball crashes into his pads and the umpire raises the finger in a snap. Smit Patel lbw b Siddharth 1 (5b 0x4 0x6)

Baroda 25/2 after 5 overs: What a spell from Sai Kishore! The lanky man darts in flatter deliveries and cramped the batsmen for room. A successful spin-experiment from Karthik continues.

Baroda 22/2 after 4 overs: OUT! Siddharth gets big fish as TN sends back the in-form Devdhar! The left-armer began with certain loose deliveries as Devdhar cashed in with successive boundaries. Siddharth sprang back with a tempting, loopy delivery outside the off-stump and Devdhar falls for the trap. He checks his shot at the last minute and is caught at covers by Jagadeesan.  Kedar Devdhar c Jagadeesan b Siddharth 16 (10b 3×4 0x6)

A fourth straight over with spin! M. Siddharth into the attack.

Baroda 11/1 after 3 overs: TN has swiftly quelled Baroda’s early plans to have imposed itself in this game. Sai Kishore is on point with his second over and gives away just two singles in another tight over.

Baroda 9/1 after 2 overs: OUT! A brilliant start for TN as Karthik begins with spin for both ends. Aparajith removes the youngster Rathva who fails to control the shot against the spin and holes out to Arun Karthick at point.  Ninad Rathva c Arun Karthick b Aparajith 1 (3b 0x4 0x6)

Baroda 6/0 after 1 over: An excellent start from Sai Kishore after conceding the initial boundary to Devdhar off a loopy delivery. The left-armer corrects the line and attacks the stumps to keep the over under check.

In walk the Baroda openers, skipper Kedar Devdhar and young Ninad Rathva.  R Sai Kishore with the ball as Tamil Nadu opts to start with spin!

6:49 pm: Surprise, surprise? M Siddharth has been included in the Tamil Nadu XI for his first game of the tournament. Aswin Crist has been left out after a poor run in the semis giving away 29 runs in two overs. Baroda, on the other hand, has stuck to the same team.

TOSS: Tamil Nadu wins the Toss and elects to Field

6:25 pm: We are nearly 30 minutes away from Toss time! With two teams running in an unbeaten strike, an exciting contest simmers….

Baroda’s nervy double triumph – Baroda’s first title triumph came against Punjab in the 2011/12 season. Irfan Pathan’s all-round show (36 and 2/24) helped Baroda beat Punjab by eight runs in a close finish. Baroda returned to the final in the 2013/14 season and take on Uttar Pradesh in the final. Batting first, Baroda made 144 in 20 overs and edged out UP by three runs in yet another nervy finish to the title.

Tamil Nadu, the inaugural champ– Tamil Nadu was the first champion of the tournament in its 2006/07 edition with a young Dinesh Karthik leading the side. In the final, TN chased down Punjab’s total of 134/8 with two wickets to spare in a close contest. The strong Punjab outfit had the likes of Indian superstars Yuvraj Singh and Harbhajan Singh while Karthik’s XI hosted Murali Vijay and Ravichandran Ashwin.

After faltering twice at the final step in the past two seasons, Dinesh Karthik’s men will aim to go all the way this time. In their way stands a Baroda side which has gone through its own share of turmoils before hitting the road.

The side lost the services of Deepak Hooda ahead of the tournament in an altercation with skipper Krunal Pandya. The latter later had to leave his side after the death of his father. Despite the odds, stand-in skipper Kedar Devdhar has led the team all the way to the finals in an unbeaten run.

Devdhar has led from the front with the bat scoring more than 300 runs. He has been supported by the likes of Smit Patel and Vishnu Solanki, who hit 16 runs of the last three balls to beat Haryana in the quarterfinals.

On the bowling front left-arm pacer Lukman Meriwala and his new-ball partner Atit Sheth have led the charge.

On the bowling front left-arm pacer Lukman Meriwala and his new-ball partner Atit Sheth have led the charge.

Tamil Nadu, on the other hand, has a well oiled core in form with the likes of N Jagadeesan and Hari Nishanth providing the starts with the bat while its spin trio of M Ashwin, Sai Kishore and Baba Aparajith have been tough customers to deal with.

With two unbeaten sides clashing in a fitting final, expect nothing short of a T20 feast tonight