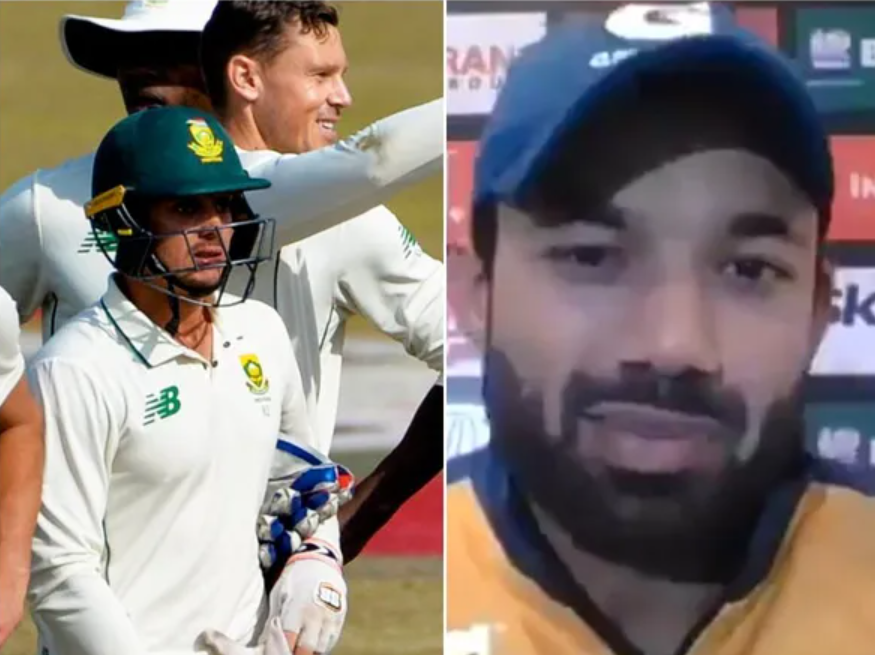 Mohammad Rizwan, who was the Player-of-the-Series in the just-concluded Pakistan-South Africa Tests, hilariously mispronounced Anrich Nortje and George Linde’s names.

A young Babar Azam-led Pakistan Test team handed a 95-run defeat to the Quinton de Kock-led South Africa in the second and final Test at Rawalpindi to clean sweep the home series. Day 5 had all three results possible as De Kock & Co. came out to bat in pursuit of a 369-run target to level the series after losing the first Test.

From 241 for 3, courtesy Aiden Markram’s 108, the Proteas fell like nine pins to lose the plot from thereon and were dismissed for 274 in 91.4 overs due to Hasan Ali’s ten-wicket haul. The match saw plenty of good performances from both sides, with the likes of Mohammad Rizwan, Hasan Ali, George Linde, Anrich Nortje, Babar Azam, Temba Bavuma and Faheem Ashraf making a mark.

However, Rizwan stole the show as he was lauded for his consistent performances with both the gloves (behind the stumps) and willow in hand. After winning the Player-of-the-Series, Rizwan was on cloud nine. His maiden ton propelled Pakistan to a challenging total in the second innings of the final Test and, thus, he came out to address the media post the series win.

At the post-match presentation, Rizwan said, “Thanks to the Almighty. I play according to the team plan. Was difficult in conditions like England and New Zealand, but the challenges are different and you have to make a few slight technical adjustments. I have a lot of self belief and I challenge myself in pressure situations.”

On the other hand, Babar was praised his side for their emphatic performances in what was his first-ever series as Test captain after being named the full-time skipper in late 2020. He said, “When the team supports you and plays according to plan there isn’t much pressure on the captaincy.”

With the win, Pakistan move to the fifth spot in ICC Test Rankings.