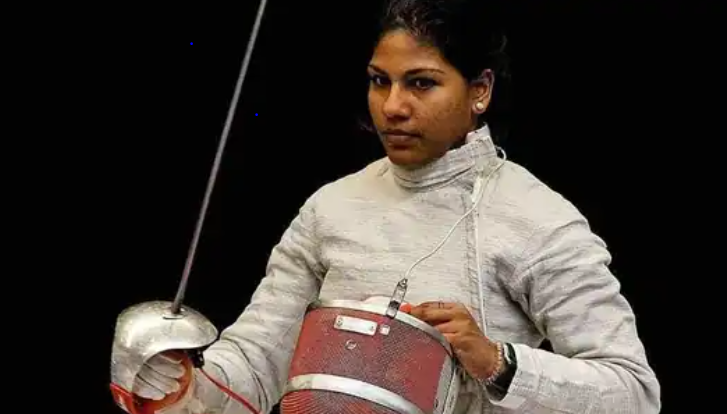 Fencer Bhavani Devi on Sunday scripted history by becoming the first fencer from India to qualify for the Tokyo Olympics.

After almost a year of wading through challenges, anxious wait and refusing to give up on her long-standing dream of making it to the Olympics, Indian fencer CA Bhavani Devi finally saw it unfold on Sunday. At the World Cup in Hungary, Bhavani sealed a spot in the women’s individual sabre event for the postponed Tokyo Games later this year, becoming the first Indian fencer ever to qualify for the Olympics.

“A moment to remember forever,” Bhavani wrote in a long post on Twitter. “A moment for which all the sacrifice, hard work, pain, obstacle, challenges, stress, ups and downs, joy, and sorrow I went through was worth it. A journey that started alone but was fulfilled with the support of many. And the journey continues.”

Her journey faced one of its toughest roadblocks in 2020. Around this time last year, the 27-year-old faced a dilemma. Training in Livorno, Italy, with reputed coach Nicola Zanotti, Bhavani was inching closer to getting to where no Indian fencer had ever before – the Olympics. That was until the coronavirus pandemic halted her charge. To add to her woes, Italy was fast becoming one of the worst hit countries at that point. So, Bhavani had to decide soon whether to continue her training there or return to India.

With international borders shutting down, Bhavani just about managed to get back home in Chennai before the lockdown was enforced in the country. The Women’s Sabre World Cup in Belgium from March 20 that year, which she was preparing for, was also cancelled. The Tokyo Olympics was pushed forward by a year and making it there for Bhavani seemed farther away than ever before.

But Bhavani found ways to keep at it – be it training without a sparring partner on her house terrace or receiving online classes from her coach Zanotti during the lockdown. Eight months passed doing just that, before she flew to Livorno in November (upon the easing of travel restrictions) and restarted proper training.

Bhavani’s significant strides in sabre fencing–the quickest and most aggressive of the three fencing styles– over the last couple of years boosted her rankings to world No 42. All she needed to do was maintain that spot and wish for things to go her way at the Hungary World Cup. And they did.

The Korean team beat Hungary in the quarter-finals and reserved their Olympics berth through team rankings. It meant Bhavani is now certain to grab one of the two individual spots reserved for Asia and Oceania zone in the world rankings (through the Adjusted Official Ranking), which will be official on April 5.

“Last year was very tough for me because I worked very hard for the last few years to compete in the Tokyo Olympics. But it was not in anybody’s control and after it was announced that the Olympics had been postponed, I felt a bit calmer. And I started preparing again,” Bhavani had said earlier.

Bhavani has carved a name for India in a sport that has little pedigree, history and training facilities in the country. Every step was a hard grind for her and her family. Her mother, CA Ramani, is a housewife and late father, C Sundararaman, was a priest; they did everything possible to keep their youngest daughter’s dream going after she took to the sport in school in 2004. “My parents and siblings were a wall of support even when many taunted us to quit the sport,” Bhavani wrote in her post. “This victory is yours. Specially dedicated to our father!”

Opportunities to grow in the sport were limited in India. Bhavani knew she had to train abroad to shine at the highest level. In 2013, she even toyed with the idea of leaving the sport. “My family had spent a lot of money. There were several business people who also came forward to sponsor me. But still the equipment expense is very high and I was tired of organising all those things,” she said earlier. “I had thought of giving up.”

But, again, she kept at it, before help came in the form of the Go Sports Foundation scholarship programme. Bhavani shifted to Italy in 2016, determined to qualify for Tokyo. Her coach Zanotti gave wings to the dream. “At first, he was surprised that an Indian is dreaming about Olympic representation in fencing but he was confident that if we work hard with the right determination, discipline, and hard work we can achieve it. We worked hard with the same determination and passion for the last 5 years and we are here to represent India at Tokyo,” Bhavani wrote.

With every international medal, Bhavani has taken the sport to newer heights in the country. She is an eight-time national champion, with medals at the Commonwealth Championships and Asian Championship. She won her first major international event at Turnoi Satellite Fencing Championships in Reykjavik in 2018. Now she will represent her nation at the Olympics.