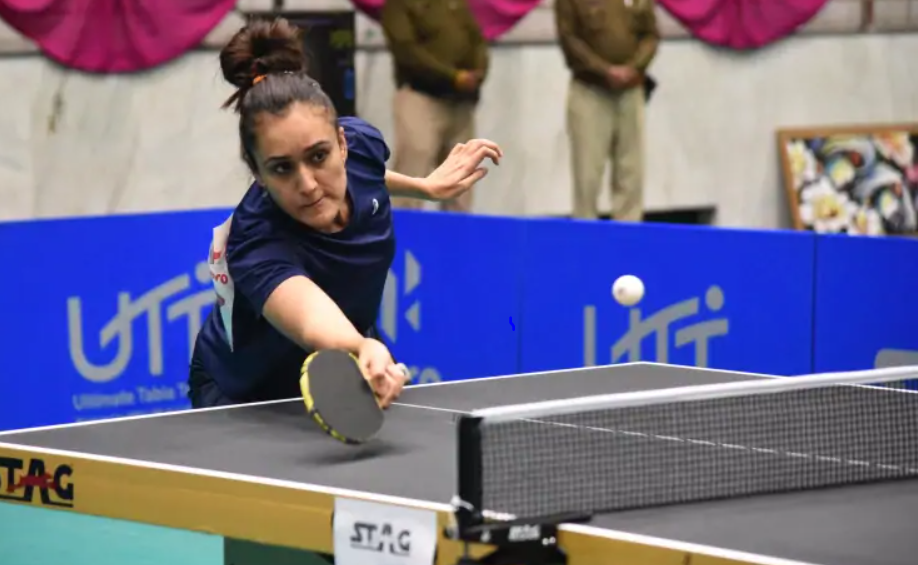 India’s top paddler Manika Batra returned to competitive table tennis for the first time since the pandemic. A win at the national championships gives her a boost, as she prepares to compete for a Tokyo Olympics quota.

Manika Batra was all smiles as she waved to her coach Sanmay Pranjape and her Belarussian sparring partner Kiryl Barabanov. She had just beaten Reeth Rishya 8-11, 10-12, 11-1, 11-9, 11-5, 11-6 at the Tau Devi Lal Sports Complex in Panchkula to win the 82nd Senior National Table Tennis Championship. But there wasn’t much time for the 25-year-old to spare after the match.

She quickly packed her bag and left for the airport to get back to her training centre in Pune. After a gap of almost a year since she last played competitive table tennis, owing to the Covid 19 Pandemic. Batra is now preparing for her first set of international events.

She will compete at two WTT Contender events starting on February 28, followed by the World and Asian Olympic qualifiers in Doha on March 14 and 18 respectively. And the World No 63 wants to be ready for them.

“I played my best in this tournament and thinking that I am the best helped me. This week, my mind was focused on the nationals but once I reach Pune, the training and focus will shift to the Contenders and the Tokyo Olympics qualifiers in Doha.”

Lockdown blues and getting back to training

Batra was in Pune when the pandemic struck in March last year. It wasn’t until July when the lockdown eased that she could start training again at the India Khelega Centre.

“It was tough mentally in the beginning because, as players, we’re not used to staying at one place for so long,” she says. “But then I got used to it. I just thought to myself that this is a part of life now and whenever I can train, I must focus on it.”

Paranjape had initially attempted to organise a table at the apartment Batra was staying in to allow her to keep in touch with the game. But he soon gave up on the idea as positive cases started to spike in Maharashtra, and there was a risk involved in sending the table.

“I knew that things would only start to get difficult for her when it came to preparing for the Olympics,” Paranjape says.

“Originally, we had planned for her Ukrainian multi-ball trainer Oleg Filenko and Barabanov to come in April so that Manika got to spend as time with them as possible to get her ready for the Olympics. But those plans got cancelled because of the pandemic.

She started to work on the table only in July and she felt pain in her entire body when we started. So we had to reduce the workload and increase it after every week. She was fully fit only in August.”

Over the last few years, Batra has helped the Indian women’s team earn an unexpected gold medal at the Commonwealth Games, and she partnered Achanta Sharath Kamal to earn India its first ever Asian Games medal in the sport – a bronze in the mixed doubles event. The Khel Ratna has added several upset wins on the way as well. A win over then World No 19 Bernadette Szocs of Romania and World No 26 Chen Szu-tu being the latest from the 2020 season.

That was all before she started to work with Barabanov, who joined her team in September last year. If anything, her already potent game has become all the more stronger with the East European’s help. The Belarussian, a former player in the competitive German Bundesliga, had played along with Paranjape. Having him as a sparring partner means that Batra would get to train with someone who can hit the ball with pace. It helped the Indian shape up her defence and improved the counter-attacking shots from her backhand side.

“Since he has more power in his shots, it helps me to counter that with the backhand,” she says. “And with him hitting with more speed means that I can try to master my backhand with the ball coming at that pace. His service and the top spin has also made me understand how to counter those better.”

Road to Tokyo via Doha

There will be eight quotas for the Olympics on offer at the World Olympic qualifiers, and six at the Asian-region qualifiers, apart from the Olympic berths available based on world ranking. Both these events, along with the WTT Contenders, will take place in Doha.

And Batra hopes to continue in the same vein of form that saw her pull off wins against Szocs and Chen last year. Paranjape is quietly confident, for he knows his ward has a shot unique to her.

On the backhand side of the bat she uses, Batra has a pimpled rubber – Phantom – which she has been using since her early days in the sport.

“Manika has got a very good feeling with the Phantom surface and we have been trying to work a lot of variations with it,” Paranjape says. “We understand her forehand needs to be better but with the backhand and this surface, she can make the ball slow or fast, or press when she wants and it helps her as not many players, including the top ranked players, use this surface. It can help her surprise them, just as she did with Chen.

As for Batra, she’s only thinking about her task in Doha.

“The only thing which I have done repeatedly is working on my basics in the last six months. Whatever happens, I have to be at my best when I’m there,” she adds.