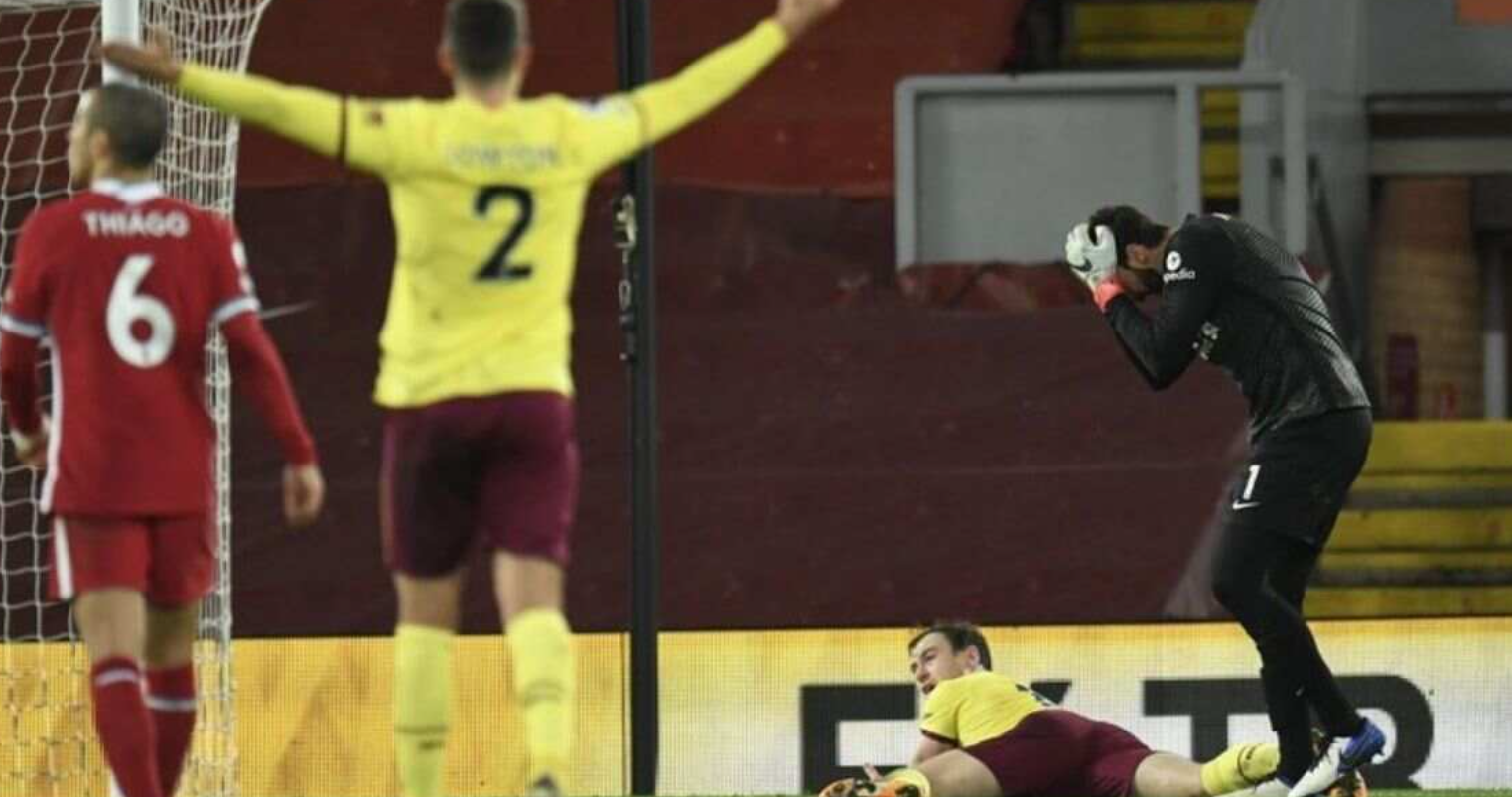 It was Burnley’s first win at Liverpool since 1974 and it leaves Jürgen Klopp’s side six points behind leader Manchester United halfway through its title defense, having not scored in four successive games.

Liverpool’s 68-match unbeaten streak at Anfield in the Premier League ended with a 1-0 loss to Burnley on Thursday in the latest setback of a fading title defense.

Ashley Barnes scored from the penalty spot in the 83rd minute after the forward was brought down by goalkeeper Alisson Becker as Burnley became the first team to win in the league at Anfield since April 2017.

“We lost a game which I think it’s actually impossible to lose,” Klopp told broadcaster Sky Sports. “But we did it, and that’s my fault because my job is to make sure that the boys have the right feelings — the right amount of confidence, they make the right decisions.”

It was Burnley’s first win at Liverpool since 1974 and it leaves Jürgen Klopp’s side six points behind leader Manchester United halfway through its title defense, having not scored in four successive games.

“We had the ball a lot, we created some situations but, in the final moment, obviously our decision-making is not right at the moment, that’s the problem,” Klopp said. “I have to make it clearer. How you come in behind their last line, these kind of things. That’s the job we have to do.”

Frustrations boiled over at the halftime whistle as Barnes reacted angrily to Fabinho appearing to flick out at him, provoking a small melee, but referee Mike Dean only showed the Brazilian a yellow card. Meanwhile Klopp and Burnley manager Sean Dyche had their own heated exchange as they headed down the tunnel.

While Liverpool is chasing a record-equaling 20th English title, Burnley is trying to stay in the league and it moved seven points above the drop zone.

“We knew if we keep believing we will get something,” Barnes said. “We were growing into the game. We managed to stick to our jobs, slow everything down, and it worked.”

Liverpool was again made to pay for its lack of a cutting edge — having left the out-of-form Mohamed Salah and Roberto Firmino on the bench for an hour — and the team has now gone 7 hours, 18 minutes without scoring in the league.

The only point taken off Liverpool at home in last season’s title charge came in a draw with Burnley.

Dyche’s team finished this game with the same amount of possession — 29% — but crucially went one better.

Burnley employed similar tactics of defending resolutely, competing physically and taking the opportunity when it arose.

The same could not be said for Klopp’s side, which had 27 attempts but only six on target.

With captain Jordan Henderson out with a minor groin problem and Salah and Firmino rested, the onus was put on replacements Divock Origi, who has one league goal since December 2019, and Alex Oxlade-Chamberlain.

Neither lived up to the billing and were taken off before the hour-mark, with Origi missing the chance of the night just before halftime.

An uncharacteristic mis-kick from Burnley captain Ben Mee put Origi clean through, but his lack of game time and confidence showed as he blasted a shot past goalkeeper Nick Pope but against the crossbar.

The Belgium striker’s only goal this season came in the 7-2 League Cup victory at Lincoln.

Pope arrived at Anfield with five clean sheets in his last 10 league games, but he was not properly tested in the opening 45 minutes.

Sadio Mane had an early header blocked by Dwight McNeil, but there followed a succession of shots from Xherdan Shaqiri, Oxlade-Chamberlain, Origi and Andy Robertson which the England international dealt with comfortably.

Burnley’s one real opportunity came when Alisson dropped a cross under pressure from Chris Wood, but he reacted well to block Barnes’ shot.

Just over 10 minutes into the second half and with the game drifting, Klopp sent on Salah and Firmino, with the Egyptian straight into the action by forcing Pope into his first decent save low at his near post.

Burnley substitute Johann Berg Gudmundsson blazed wide from close range, but it was not as bad as the Firmino effort which was so off-target that compatriot Alisson, 80 yards away, dropped to his knees, held his head and let out a yell.

After Burnley’s goal, Liverpool chased an equalizer but Firmino’s close-range shot was deflected wide by Mee.

“It obviously didn’t work out tonight and that’s what we have to admit,” Klopp said. “It’s obviously my fault.”