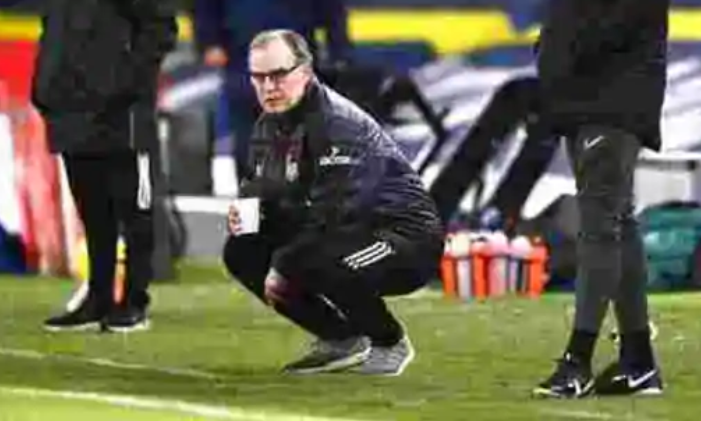 Bielsa, who is known for his eccentricities during matches, including sitting on a plastic bucket on the sidelines, has been praised for his high-energy, attractive brand of football — even when Leeds loses.

Leeds is starting to feel like home for manager Marcelo Bielsa. The 65-year-old Argentine is approaching three years at the helm, the longest by far he has been at a club. By comparison, Bielsa spent a whole two days in charge of Lazio in 2016.

Bielsa, who is known for his eccentricities during matches, including sitting on a plastic bucket on the sidelines, has been praised for his high-energy, attractive brand of football — even when Leeds loses.

Unlike in other jobs, Bielsa says he has the support of the club’s leadership.

“I like to work with the players that Leeds has,” Bielsa said on Sunday. “I like the structure that Leeds has — the directors and in the academy.”

He has guided his players from a mid-table second division side to promotion to the top flight, where they are making waves. And Leeds fans are even dreaming of a place in a European competition next season.

But he also has faced criticism for persisting with his attacking mentality, leaving his team exposed at the back and letting in goals — like in Leeds’ 4-2 loss to Arsenal on Sunday. The team has scored 40 goals this season, but also has had 42 scored against it.

Others have said that his players tend to hit a wall at the end of seasons because of fatigue or injuries as a result of constant running and pressing during matches.

But Bielsa has never wavered and he has the backing of the fans, who view him as a cult hero. And he believes Leeds could increase the capacity at Elland Road to up to 50,000 if the club could accommodate them. The current capacity is around 36,000.

“Leeds fans are loyal,” Bielsa said Sunday. “All of this makes Leeds an attractive team. And it’s in the best league in the world.”

His nearly three years at Leeds is a milestone, not only because owners in English football are fickle if things aren’t going well, but also because he’s not afraid to stick to his beliefs — even if it means losing his job.

His shortest time at a club was two days, when he walked away from Lazio in 2016. He later cited disagreements with management about player recruitment.

Bielsa also left under acrimonious circumstances from French side Lille. He testified before a French court to make his case for millions of euros in damages over his firing from Lille more than three years ago. Bielsa lasted just six months at Lille before the French club fired him for “serious misconduct” in December 2017 following poor results.

Bielsa cuts an odd figure in the Premier League, sometime sitting on that plastic bucket, pacing back and forth on the touchline or squatting down during matches. He also has an explosive side, screaming at his players when they don’t follow his instructions. On Sunday, he kicked a paper cup minutes after Arsenal scored its first goal.

He has earned the nickname “El Loco,” or “Crazy One,” for earlier incidents in his managerial career. In 1990, he made a famous remark to inspire his players while in charge of Newell’s Old Boys in his native Argentina before a derby against archrival Rosario Central.

“If I have to cut a finger of mine to win tomorrow’s derby, I will,” he told his players. “I still have four left.”

After a 6-0 loss to San Lorenzo in a Copa Libertadores match, a group of hardcore fans came to his doorstep. Bielsa then reportedly came out holding a hand grenade and threatened to pull the pin if the fans didn’t leave.