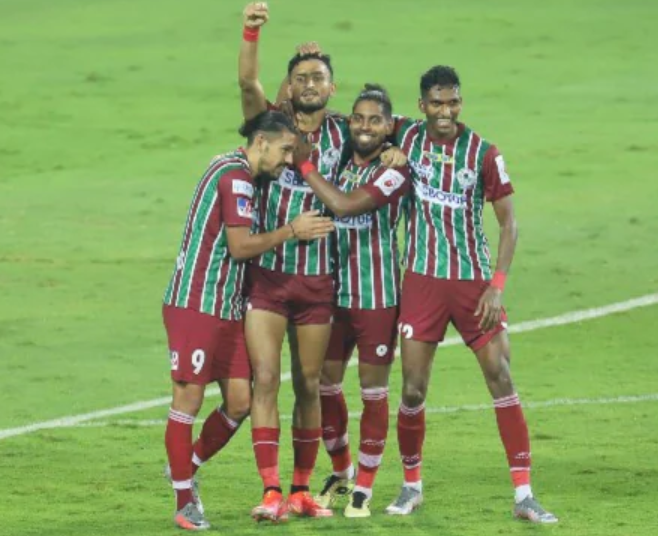 Long before the current season of the Indian Super League began, reigning champions ATK Mohun Bagan were already everyone’s shoo-in to defend the title. Now, several months and many, many matches later, they find themselves within touching distance of a second successive title after beating NorthEast United in a thrilling second leg of the semi-final.

Here are the talking points from ATK Mohun Bagan’s 2-1 win over NEUFC:

At first glance, there was something that looked strange about the ATK team sheet. For some reason, Javi Hernandez was listed as playing on the left wing. Now, as much as I respect the footballing abilities of the Spaniard, he’s hardly a winger, and the thought of him running up and down the touchline seemed off. As soon as the match began, however, ATK’s true formation just nicely clicked into shape.

Hernandez dropped deep into the space behind roving attackers David Williams and Roy Krishna, turning the system into a 4-3-3 in attack. It took a while for it to become apparent that this wasn’t the system that would be employed whilst defending, since NorthEast barely had a glimpse of goal for the first 15-20 minutes. But when NorthEast did eventually manage to get a couple of attacks going, the brilliance of the system shone through.

Taking advantage of Manvir Singh’s incredible stamina, Habas had engineered a set up in which the winger would drop deep while defending, essentially becoming a wing-back, with Pritam Kotal tucking into a slightly more central defensive role along with Tiri and Sandesh Jhingan in the middle of ATK’s backline. This allowed them to have greater control over the game when not in possession, and with Subhasish Bose and Manvir’s speed, they could transition quickly from defence to attack, creating overloads on either wing.

This is a system that Habas has implemented on a few occasions prior to this, but on Tuesday, it worked wonders, especially in the first half, as Subhasish became an ever-present thorn in the side of Ashutosh Mehta, rampaging down the wing and putting in multiple deadly crosses. He also had a decent shot at goal, after being played through by Roy Krishna, but his attempt was hit straight down Subhasish Roy Chowdhury’s throat. While much of the attacking impetus was channelled down the left flank, Manvir, over on the other wing, also proved dangerous a few times, sending in some tantalising crosses that were unfortunately not met by any of his teammates.

Krishna is deservingly adored for his uncanny ability to score goals, but in this semi-final tie, he has played the role of provider, assisting all three of ATK Mohun Bagan’s goals. For the first strike in the second leg, he dropped into a pocket of space between NorthEast’s midfield and defence to receive a ball from Carl McHugh, before swivelling and picking out David Williams with a gorgeous through ball that perfectly dissected the space between Mashoor Shereef and Ashutosh Mehta on the right of NorthEast’s backline. Williams, being the ever-willing runner that he is, sprinted onto the pass, took the deftest of touches to get it onto his right foot and then buried it into the net, past a completely exposed Chowdhury.

Krishna was perhaps a little less involved in the second goal, but it will still go down as his assist. Krishna received the ball deep in ATK’s half in the immediate aftermath of a NorthEast attack, and in a bid to launch a quick counter, he played a ball to Manvir, who was racing up the right flank. Manvir picked up the ball somewhere around the half-way line, and with great intent, speed and composure, raced towards goal, with Gurjinder and Shereef still in his path. Cutting inside, he circumvented the defensive duo, and with his left foot, unleashed a thunderous shot that arrowed into the top left corner of NorthEast’s goal.

Jhingan’s reintroduction into the ATK starting XI could not have come at a better time. Following his substitution in ATK’s 2-2 draw against Hyderabad, ATK have lost 2-0 to Mumbai in what was essentially a cup-final for the ISL League Winner’s Shield and then conceded a very, very late goal against NorthEast United to draw in the first leg of the semi-final. Without him, they appeared a little disjointed at the back, but his return coincided with a very strong defensive display in which NorthEast looked unlikely to score for large stretches of the game. He marshalled the threat of Idrissa Sylla with great composure, and heading into a final against Mumbai, who have the likes of Bartholomew Ogbeche and Adam le Fondre in their attacking arsenal, Jhingan’s defensive capabilities will be vital.

To their credit, NorthEast did fight back after going two goals down, and managed to draw one back after a ditzy moment from Arindam Bhattacharya, who pushed what should have been a routine catch from a corner onto the crossbar and back out into a crowded penalty area. The ball fell quite neatly onto the head of VP Suhair, who gladly headed it back towards a gaping goalmouth to give NorthEast a glimmer of hope in the 74th minute.

Buoyed by the goal, NorthEast then launched an all out offensive in the next five minutes, bearing down on ATK’s goal at every chance they got. Deshorn Borwn almost got in on goal on a couple of occasions, but the best opportunity that Khalid Jamil’s men had had all night came in the 81st minute of the match, when Subhasish Bose stupidly clattered into the back of Idrissa Sylla in the penalty area. It looked obvious in real-time, but even more egregious in the replay, and ATK were in real trouble.

Luis Machado stepped up to take the penalty. Had Federico Gallego been on the pitch, he would probably have taken it, but in the moment, there wasn’t any need to be worried really. Machado had done this before. In Gallego’s absence, the Portuguese attacker had shouldered this very same responsibility, scoring a 94th-minute penalty under tremendous pressure to earn a draw against Chennaiyin FC in the league stage. But perhaps the grandeur of this occasion got to him. Facing a nervy Arindam Bhattacharya, who had just made two mistakes in quick succession over the past five minutes, Machado somehow failed to test the keeper, blasting his penalty over the crossbar and into the night sky behind ATK’s goal. It was done. NorthEast’s incredible season was at an end. ATK were through to yet another final.