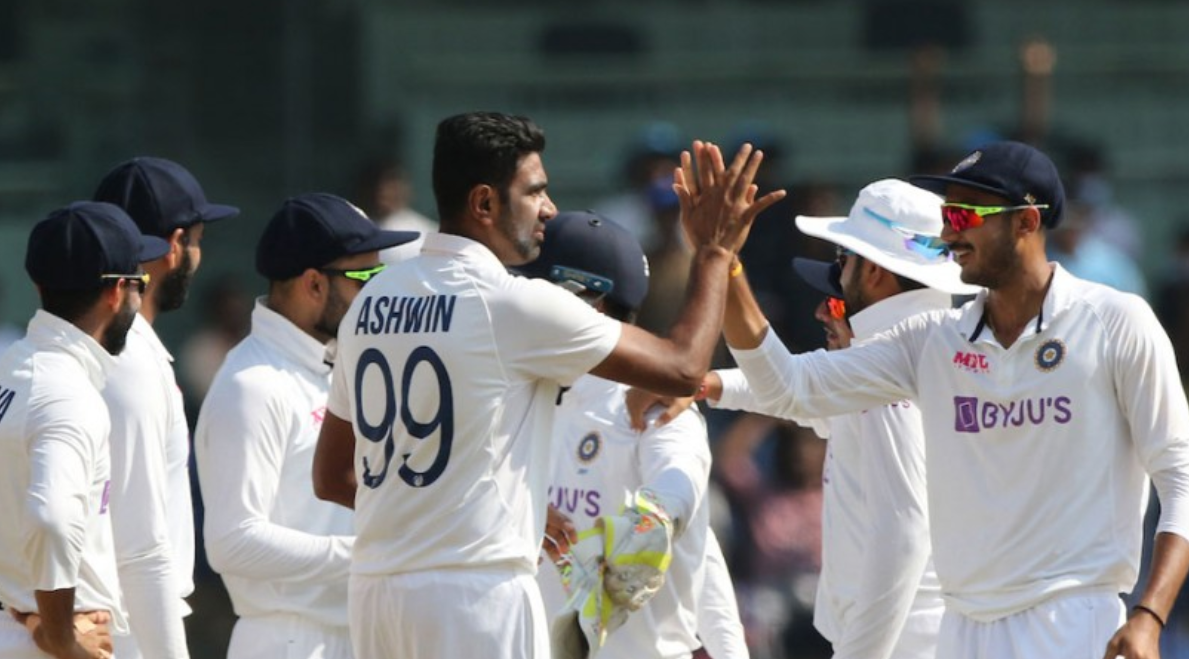 The spin troika of Ravichandran Ashwin, Axar Patel and Kuldeep Yadav claimed 17 of possible 20 wickets to set up India’s massive win against England in Chennai

Axar Patel and Ravichandran Ashwin predictably completed the annihilation of clueless England batsmen, emphatically bringing India back in contention for the World Test Championship final with a series-levelling 317-run victory in the second Test in Chennai on Tuesday.
Debutant Patel made full use of favourable conditions to bag 5 for 60 in 21 overs while Ashwin finished with a match-haul of eight wickets, not to forget his classy hundred with the bat. They demolished England for a paltry 164 on the fourth day in pursuit of an impossible target of 482, giving India their biggest win over the tourists in terms of runs.
India have now risen to second in the WTC standings and need to at least win one more and draw another in the four-match series to make the cut for the final in June.

After a crushing 227-run defeat in the first Test, Virat Kohli couldn’t have imagined a better comeback going into the crucial Day/Night Test in Ahmedabad in just over a week’s time.

“The conditions were challenging for both sides, but we showed more application with the bat. We didn’t panic out there looking at the turn and bounce, we showed grit, got into the game and scored 600 runs in the game,” an ecstatic Kohli said in the post-match presentation.

While critics, mostly from the English side, had panned the pitch but two hundreds and three fifties by the home team batsmen showed that it was all about understanding of conditions and brilliant application from the likes of Rohit Sharma, Ashwin, Kohli, Rishabh Pant and debutant Patel.

From the visitors’ own ranks, No.9 Moeen Ali went on a six-hitting spree in his 18-ball 43 to show the ones above him in the order, how it is done on a dust bowl.

“Credit to India, they outplayed us in all three departments. It has been an education for us, you could come up with conditions like these and we have to learn from this and find a way to score runs,” said Kohli’s opposite number Joe Root.

The Indian team currently is so strong that it could afford to rest its best pacer Jasprit Bumrah, miss out its premier all-rounder Ravindra jadeja but yet make a telling statement, nullifying any advantage that England team might have possessed.

Opener Rohit should come in for special mention considering the start that India needed after first Test disaster. Rohit set the tone and then it was a Test match that Ashwin will remember forever.

Young Rishabh Pant, whose glovework at times invites unnecessary scrutiny, pulled off a lovely stumping to get rid of Dan Lawrence (26 off 53 balls) off Ashwin.

Ashwin flighted one to entice Lawrence out of the crease and the ball turned and travelled between the batsman’s legs.

Pant was unsighted for the better part as he moved down the leg and maintaining his balance, collected it to effect a smart stumping that would make even Wriddhiman Saha and all his ardent fans very happy.

Ben Stokes (8 off 51 balls) has been famous pulling off Houdini acts but on Tuesday, no such magic was in store against two top-quality slow bowling operators.

Stokes, for close to an hour, scratched around for eight runs as both Axar and Ashwin kept a tight leash on him. Coming round the wicket, Ashwin got one to turn away as Stokes, with a forward defensive prod, tried to keep the ball down. But all he managed was an inside edge onto the pads and Kohli, who had placed himself at wide second slip, gleefully caught the loopy gift.

Root, as he waged a lonely battle, got a reprieve when his reverse sweep off Kuldeep Yadav, while batting on 32, was dropped by Mohammed Siraj stationed  at deep point.Axar, who had shown brilliant discipline by landing 90 percent of his deliveries on the rough and beating the right-handers at will, finally got his reward when Ollie Pope (12) top edged while going for a slog sweep.

There was a bit of extra bounce and that did Pope in with Ishant Sharma, the only fielder stationed at deep mid-wicket, taking an easy catch.

Ben Foakes, after a memorable match behind the stumps, also didn’t stay long as Kuldeep Yadav (2/25), the third spinner, had something to cheer as another mis-timed sweep shot landed in the palms of the mid-wicket.

Having beaten Root’s edge a number of times, he landed one successfully on the spot and as the England captain pushed forward, the ball bounced enough and took an edge before flying into slips.

On a track, where a five-for was there for the taking, Axar removed Olly Stone to get his maiden five-for in his debut Test match just like his spin bowling partner Ashwin did nearly a decade ago and Narendra Hirwani around 33 years back.

Moeen (43 off 18 balls) with no worries in the world entertained himself with three successive sixes which was more of an audition for interested IPL franchises.

Fittingly it was another smart Pant stumping off Kuldeep that brought curtains down on a highly satisfactory outing for Kohli and company.