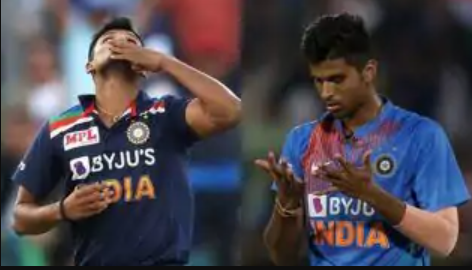 India vs Australia, 4th Test: India have two Test debutants in T Natarajan and Washington Sundar. Mohammed Siraj, who has played 2 Tests, will lead the bowling attack which will be without R Ashwin and Jasprit Bumrah in Brisbane.

Natarajan’s dream run in Australia continues. The left-arm fast bowler received his Test cap, 300th for India, as he made his debut in the longest format for India in the 4th and final Test against Australia at the Gabba in Brsibane.

Along with T Natarajan, his Tamil Nadu teammate and off-spinning all-rounder Washington Sundar made his Test debut on Friday. He was handed the 301st Test cap by Ravichandran Ashwin, who misses out due to a stiff back.

T Natarajan also becomes the first Indian player to make debuts in all 3 formats — T20I, ODI and Test on the same tour. He is the 17th player overall to do so. He becomes the second India player to do so after Bhuvneshwwar Kumar in the same season.

Natarajan made his ODI debut in the series finale after coming in as a back-up for Navdeep Saini who had a back niggle. Natarajan was initially added to the T20I squad as a replacement for mystery spinner Varun Chakravarthy who got his maiden India call-up before being ruled out.

Notably, both Natarajan and Sundar were not in the Test squad as they were retained as net bowlers after the limited-overs series. However, due to the array of injuries India have had to face in the Test series, the two Tamil Nadu cricketers have made their debuts after a dramatic turn of events.

With India not having Jasprit Bumrah and R Ashwin, they have fielded a bowling attack that has a combined experience of 4 Test matches — Mohammed Siraj, playing his 3rd Test will be the leader of the attack.

India have brought back Shardul Thakur to the Test team after the pacer bowled just 10 deliveries on his Test debut in 2018. Navdeep Saini has retained his place after a good debut in Sydney wherein he picked up 4 wickets across 2 innings.