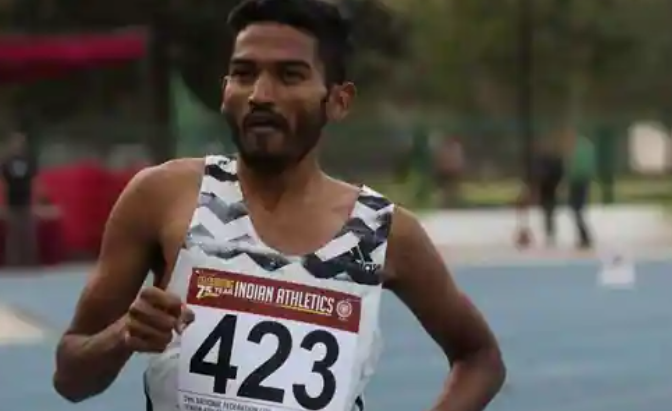 The armyman, who has already qualified for the Tokyo Olympics, has improved his national record five times since injury kept him out of the 2018 Jakarta Asian Games.

Avinash Sable was in his own zone from start to finish, bettering his national record for the fifth time since 2018 by clocking 8:20.20 in the 3,000m steeplechase at the Federation Cup athletics here on Wednesday. The race was a nightmare for the competitors with five runners injured. Prince Raj Mishra (dislocated ankle) and Navin Kumar Dagar (tibia) seemed to have suffered serious damage and were stretchered off and taken to hospital for scans.

While it was mayhem behind him, Sable was cruising through with none even remotely looking like catching him. In 2019, when he clocked 8:21.37 in the final of the World Athletics Championships in Doha, it was the fourth time he had broken his record in a year. Having already qualified for the Tokyo Olympics, he crossed that mark of 8:22.00 on Tuesday a second time, showing his class. Sable has steadily improved since injury kept him out of the 2018 Jakarta Asian Games.

During lockdown, the armyman from Maharashtra was worried after his training came to a halt for a brief period. He had no competitions for more than a year. He even ran a road race in between to stay in competitive shape. Having run in the Indian Grand Prix 3 on March 5 and the Federation Cup, Sable said he is on the right track. All he wants now is to compete in international meets with quality fields to prepare for the Tokyo Olympics.

At the 2016 Rio Olympics, the bronze medallist clocked 8:11.52, almost nine minutes faster, which gives an idea of the level of improvement Sable is chasing.

“In India, I do not get a good level of competition and it is difficult to maintain a good pace. So, I came prepared to run my own race and challenge myself to better my timing,” Sable said. “When you are running in a pack, the race is different, you are pushed,” he added.

“I have been preparing at the SAI centre, Bengaluru for six months now and you can see the good results,” said the 26-year-old.

Sable was supposed to train under Belarussian coach Nikolai Snesarev, but the 72-year-old died in his room here earlier this month. His coach from the army, Amrish Kumar, contracted Covid before the Federation Cup and is in quarantine.

“I trained on my own for Fed Cup. I have not decided under whom I will train. I will decide after talking to the federation,” Sable said. “There is still some time to prepare for the Olympics. I’m still not 100%, I can give better performance. But I need to go out and compete with the best runners at least in two-three events before the Olympics. That will help me improve.”

Asked about so many injuries in the race, Sable said he was lucky to train in a SAI facility. “3,000m steeplechase is a difficult race. Some runners have not been able to train well due to the lockdown. They could not get a ground during off-season. Maybe that’s why there were so many injuries.”

Javelin star Neeraj Chopra set a meet record achieving 87.80m in his final attempt. Chopra, who has qualified for the Tokyo Olympics, set the national record of 88.07m in the Indian Grand Prix 3.