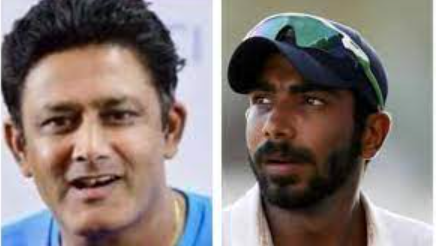 Team India’s premier pacer Jasprit Bumrah is leaving no stone unturned to get into the groove ahead of the upcoming four-match home Test series against England starting February 5.

The speedster had to warm the bench during the series-deciding historic Gabba Test match due to an abdominal strain and now, he is making the most of his time by sweating it out in the nets to ensure that he rediscovers his rhythm for a gruelling home season. Lately, ‘Jassi’ entertained one and all by doing something that was out of the box.

While the passionate cricket fans have seen Bumrah bamboozling the best in the business by his fiery yorkers and sharp bouncers, for a change, he decided to become a spinner in the nets and was seen emulating spin legend, Anil Kumble.

The Board of Control for Cricket in India (BCCI) had posted a video where India’s pace spearhead was seen rolling his arms over and imitate Kumble’s bowling action. At the same time, the BCCI also came up with a video compilation of a few bowling spells of  ‘Jumbo’ from the early 2000s.

The Karnataka cricketer has 619 Test scalps. He is the third-highest wicket-taker in red-ball cricket after Sri Lankan legend Muttiah Muralitharan (800) and Aussie sensation Shane Warne (709) respectively. ‘Jumbo’ had bid adieu to international cricket in 2008. He is currently a commentator/analyst and a former coach of Team India.

The Men In Blue who were the defending champions had a great outing as they made it to the finals. However, they failed to defend their title by suffering a humiliating 180-run defeat at the hands of arch-rivals Pakistan who went on to win their maiden CT title.

Chasing a stiff target of 339 to retain their title, India’s top-order including the likes of Rohit Sharma, skipper Virat Kohli, and Shikhar Dhawan were sent back to the pavilion early on as they never recovered from the initial setback and were eventually bundled out for 158.