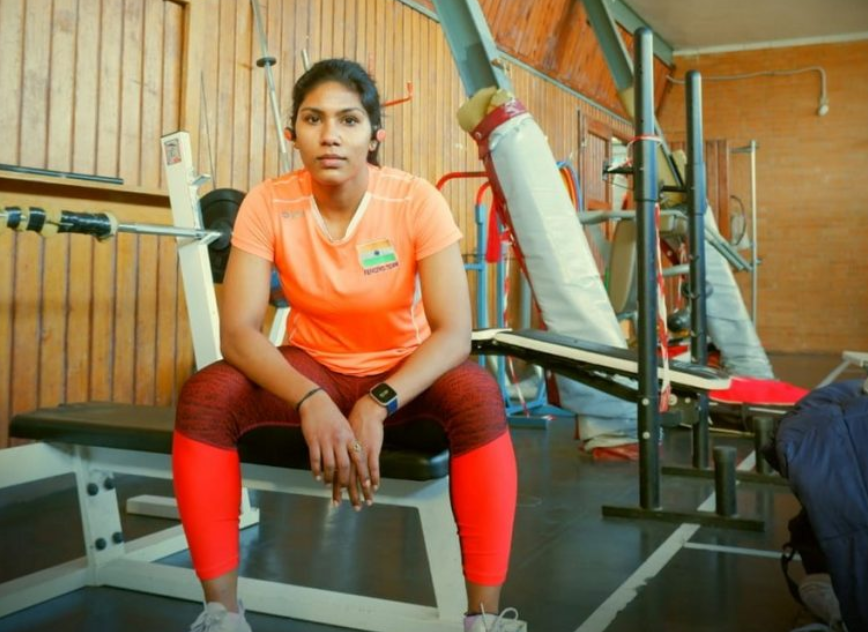 Mother Ramani is pleased that Bhavani reached the top of her sport, never compromised on education, and proved her late father was right to have faith in her.

Chennai: Searching for the house of India’s newest Olympic hopeful C.A. Bhavani Devi in Chennai’s Old Washermanpet area is no easy task. The location indicated is Maharani Theatre, but it’s difficult to find the house near that landmark. Passersby ask the street name or house number to be able to give directions, but the search is fruitless till one asks if anyone knows where Bhavani Devi lives.

“You should have said that earlier. Everyone knows her house. She has just qualified for the Olympics,” the local coconut seller R. Mukaiya reproaches this reporter, albeit with pride.

Bhavani, 27, made History Sunday by being the first Indian fencer to qualify for the Olympics, securing a slot through the Asia/Oceania Zone of the official rankings after Hungary lost to South Korea in the quarter-finals of the Sabre Fencing World Cup.

However, this is far from her first achievement in the sport modelled after sword fighting. In 2017, she became India’s first international gold medallist in fencing at the Women’s World Cup satellite tournament in Iceland.

Fencing made its debut at the inaugural modern Olympics in Athens in 1896, but the women’s event only began in 1924. Fencing is fought with three different kinds of blades — foil, épée and sabre. Bhavani competes in the sabre discipline, known for quick movements.

Bhavani took to fencing almost by chance. Her mother C.A. Ramani explained that when Bhavani was 11 years old, the ‘Sports in Schools’ programme started by then-chief minister J. Jayalalithaa offered swimming, squash, fencing and boxing. Of these, Bhavani picked up squash and fencing, but had to choose when both sports ended up holding competitions on the same day.

“I suggested she take up fencing since it was a new game, with different equipment and gear, unlike squash, which was a racquet sport,” Ramani said.

Bhavani, the youngest of five siblings, never looked back. She won her first gold medal in 2004 at the sub-junior national championship, at the age of 11. By this time, she had moved to Bangalore to train, having practiced at Chennai’s Nehru Stadium with no real coaching.

“She would have senior players guiding her and no coach, but even then, she was extremely determined and disciplined,” said Ramani, unable to contain her excitement and pride in her daughter’s achievements.

Her mother worries that she gets many scars and is hurt a lot, but, she says, for Bhavani, these are “small casualties”. Bhavani’s own Twitter bio reads “the harder the battle, the sweeter the victory”.

And the battle certainly has been hard. The family faced many financial constraints to ensure she got proper training. First, she practiced with bamboo sticks, but later, had to get proper fencing gear for training. “The weapon costs Rs 6,000 and is very brittle and can break easily,” Ramani explained.

Bhavani’s father Anandha Sundharam was a priest in the nearby temple and her mother a homemaker. Her grandfather, as well as an older brother and sister are advocates.

Although initially, the family was able to fund her training, as she started competing more and more, they began feeling the pinch. It has been reported

that Ramani pawned jewellery to ensure Bhavani’s training continued. When asked about this, she simply said: “I don’t want to talk about it.”

Bhavani’s father never worried about the money spent on her training. “He used to say ‘the money spent here will never go waste’. He always believed in her,” Ramani recalled.

This faith was also shown in Bhavani by both major political leaders of her home state Tamil Nadu — while then-CM M. Karunanidhi gave her Rs 1 lakh in government aid in 2007, Jayalalithaa gave her Rs 1 lakh the next year in her personal capacity.

“I still remember Jayalalithaa telling Bhavani that she was proud of her after she won a tournament in Venezuela in 2011,” said Ramani. 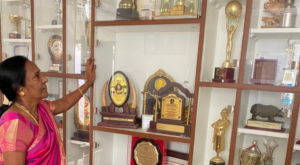 Bhavani became part of the GoSports Foundation in 2015, and currently trains under an athlete mentorship programme named after Indian cricket legend Rahul Dravid. An athlete manager at GoSports who did not wish to be named said: “No matter what, Bhavani is always focussed. She can deal with all sorts of pressure.”

While Bhavani is the only one in the family to take up a sport, her mother is quick to assert that her daughter’s studies never took a back seat — she has completed her MBA from Anna University.

P. Ponni, the sports secretary at her school — Muruga Dhanushkodi Girls’ Higher Secondary School — said Bhavani was always a brilliant student and sportsperson. “She was the epitome of discipline and hard work,” she said.