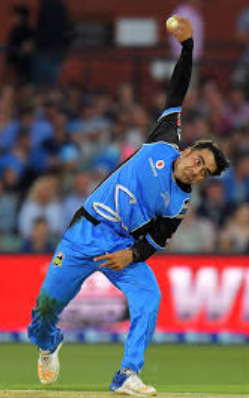 The Strikers made 5-150 from 19 overs in reply to the Stars 7-149 to seal victory in Rashid Khan’s final game of the season, with Jonathan Wells guiding his side home.

The Stars made 7-149 from their 20 overs after winning the toss with Nic Maddinson top scoring with 48 not out and Rashid Khan taking 2-29 and a catch in his Strikers farewell.

After winning the toss and batting Andre Fletcher was first man out for the Stars caught by Ryan Gibson off a full toss from Wes Agar for 12 after smashing two sixes.

Nick Larkin helped steady the ship with Stoinis before Rashid Khan playing in his last game before national duties turned the game on its head.

Khan bowled Larkin through the gate before having Glenn Maxwell caught by Danny Briggs for a first ball duck to put him on a hat-trick.

Stoinis smashed four fours and three sixes in a 31-ball 47, before he was caught by Jake Weatherald off Wes Agar in the same over he was dropped by Jono Wells.

Things went from bad to worse for the Stars when Hilton Cartwright was caught behind by Alex Carey off Harry Conway for 2.

Mark Waugh blasted the Stars for their ‘dreadful batting’ after Seb Gotch hit a full toss to Khan off Worrall to be dismissed for 11, which made it 6-111 with two overs remaining.

Adam Zampa was next to go bowled by Worrall for 1 to have the Stars reeling.

However Maddinson’s 48 not out gave the Stars a respectable total, especially after he smashed two sixes off the last two balls of the innings.

In reply Matt Renshaw was first man out for the Strikers after flicking a ball off his legs to Nick Larkin off the bowling of Sam Rainbird for 9.

Phil Salt belted four fours in his 22-ball 31 before Glenn Maxwell had him caught in the deep by Liam Hatcher.

Jake Weatherald smashed a four and a six on his way to a quick-fire 19, before Zampa struck again in the power play to get the Stars right back in the contest.

Jono Wells blasted two fours and two sixes in his 36, before he was caught by Larkin off the bowling of Haris Rauf to give the Stars a sniff.

However man of the moment Rashid Khan (4) and Ryan Gibson (22) guided the Strikers to an important win as the Stars slumped to their sixth loss of their BBL10 campaign.