Jessica Pegula defeated Elina Svitolina to register her first victory over a Top 10 opponent. Among men, Nadal and Medvedev advanced to the quarter-finals

The Spaniard, bidding for his first title at Melbourne Park since 2009, has yet to drop a set and kept the record intact against the fiery Italian, winning 6-3, 6-4, 6-2 on Rod Laver Arena.

It is the 13th time he has made the last eight in Australia, moving to joint third on the all-time list behind only Roger Federer (15) and John Newcombe (14).

The result keeps him on track to meet top seed Novak Djokovic in the final, with the Serb, who is carrying an abdominal injury, into his 12th quarter-final after seeing off the threat of Milos Raonic on Sunday evening.

In men’s action, No 4 seed Daniil Medvedev got to the quarter-finals at Melbourne Park for the first time by eliminating 192nd-ranked American Mackenzie McDonald 6-4, 6-2, 6-3 in 1 1/2 hours. Medvedev, the 2019 US Open runner-up, will play Andrey Rublev or Casper Ruud next.

Jessica Pegula’s first victory over a top-10 opponent earned the 26-year-old American her first trip to the quarter-finals of a Grand Slam tournament.

And now she’ll face good pal Jennifer Brady in an all-US match-up with a berth in the final four at stake.

“It’s an opportunity for both of us,” Pegula said, recalling that she and Brady became close after playing doubles together for the United States in the competition now known as the Billie Jean King Cup. “I’m just happy I’m here. She’s been playing some good tennis, solidifying herself as a top player.”

When the 61st-ranked Pegula, whose parents own Buffalo’s NFL and NHL franchises, finished beating no 5 seed Elina Svitolina

of Ukraine 6-4, 3-6, 6-3 in Rod Laver Arena on Monday (Sunday night EST), she scribbled a message on the screen of a courtside television camera: “hi mom, hi dad, see you next rd Jen B.”

And after the 22nd-seeded Brady, a 25-year-old from Pennsylvania who played college tennis at UCLA, got off to a perfect start by grabbing the initial five games en route to a 6-1, 7-5 victory over No. 28 Donna Vekic of Croatia, she used a blue marker to respond in kind, writing: “Bring it Jess!”

Pegula is on quite a breakthrough run.

She has won four matches at Melbourne Park over the past week — including victories over two-time Australian Open champion Victoria Azarenka and 2011 U.S. Open champion Sam Stosur — after entering the hard-court tournament with a total of three wins at majors for her career.

Also significant for Pegula, who works with Venus Williams’ former coach, David Witt: She came into the day with an 0-6 record against Top 10 women.

Witt said Pegula’s rising confidence is a big part of her progress. She found a sort of kinship with her family’s football team, the Bills, who made the playoffs three of the past four seasons behind quarterback Josh Allen after going nearly two decades without a trip to the postseason. 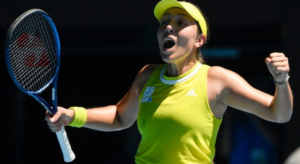 “Even last year, when he wasn’t playing that well, I was like, ‘I like this kid.’ I loved his competitive spirit. He was a gamer. He just wanted to win. That’s something you love to see,” she said about Allen. “It’s definitely something I think I tried to take into my game a little bit, even watching the team getting that grit, that competitive attitude, having that mindset — in tennis, it’s like 90%, sometimes, of the matches. I think it’s been really cool to watch them and kind of channel that energy into how I’ve been doing.”

Brady’s progress is far less surprising, given that she made it all the way to the semifinals at the U.S. Open in September before losing to eventual champion Naomi Osaka. She hit nine aces Monday.

Vekic’s right knee was heavily taped by a trainer early in the second set, which was at 5-all a little while later. But Brady broke at love there when Vekic double-faulted, then held for the victory.

The last two women’s fourth-round matches were No 1 Ash Barty vs unseeded American Shelby Rogers, and No 18 Elise Mertens vs Karolina Muchova.

With the sky blue and the temperature in the low 70s Fahrenheit (low 20s Celsius), and no fans in the stands for the third day in a row because of a local Covid 19 lockdown, Pegula dictated groundstroke exchanges from right along the baseline.

In the early going, she pushed around two-time Grand Slam semi-finalist Svitolina, who eliminated American teenager Coco Gauff in the second round, and went up by a set and a break at 1-0 in the second.

Up until then, Pegula had not been broken.

But that’s where Svitolina, everything slipping away, made a stand. She suddenly broke Pegula twice in a row, part of a four-game run that put Svitolina ahead 4-1 in the second set on the way to forcing a third.

As if flipping a switch, or remembering what worked so well earlier, Pegula returned to her more aggressive brand of hit-to-the-corners play and led 4-1. She did get broken to 4-3, but broke right back, then served out the most important victory of her career by grabbing the last four points after falling behind love-30.