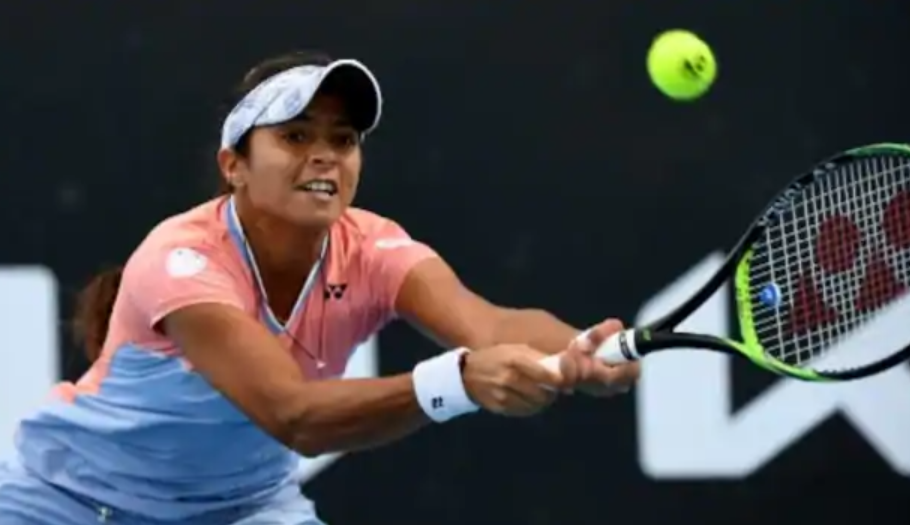 With Sharan and Raina’s loss, India’s hopes in the men’s and women’s doubles came to an end. Rohan Bopanna remains the lone Indian left standing in the tournament

It was yet another disappointing day for the Indians at the Australian Open, with a loss in the women’s doubles and men’s doubles. Divij Sharan, second highest ranked Indian doubles player, crashed out in the first round along with partner Igor Zelenay from Slovakia. The unseeded pair failed to get the better of Germany’s Kevin Krawietz and Yannick Hanfmann, losing 1-6, 4-6 in just over an hour.

Meanwhile, Ankita Raina, the only Indian woman at the Australian Open, and her partner Mihaela Buzărnescu excited in the first round of the women’s doubles event, losing to Australian wildcards Belinda Woolcock and Olivia Gadecki 3-6, 0-6.

Sharan and Zelenay no match for German opponents

Krawietz-Hanfmann proved to be too good for the Indo-Slovak pair, especially in the first set. They were quick to get out of the gate, breaking Sharan’s serve early on in the match. The 38-year-old Zelaney wasn’t in control of his shots in the first set, making multiple errors. The pair had a chance to break back at 3-1 but two errors from the racket of the big Slovak gave the German pair a double break.

From there, there was no stopping them as they overpowered Sharan and Zelenay. Hanfmann, especially, was quick to jump on the serve of the Indian, hitting multiple return winners, with a return percentage of 74% in the first set.

The second set was more competitive with Sharan and Zelenay having more chances to make a comeback. The German pair had a chance to take an early break in the second set but big serving from Zelenay prevented that from happening. From then on, both Sharan and Zelenay displayed a lot more confidence in their serve, and on their volleys as they took the fight to the Germans.

The ninth game of the second set was hotly contested with the Indo-Slovak pair creating three break opportunities thanks to two exquisite return winners from Sharan’s backhand. However, the Germans held their nerve to stay on serve. Finally, a sloppy service game from the Indian handed the match to Hanfmann and Krawietz, who will next take on eighth seeds and experienced pairing of Nicolas Mahut and Pierre-Hugues Herbert from France in the second round.

The conditions at Melbourne Park were not favourable for either team, with strong winds blowing through the courts, causing players some problems while serving.

Sharan and Zelenay would rue their missed chances in the second set, failing to convert six break opportunities. Sharan has now failed to get past the first round of a Slam for the third time in a row, losing in the first round of the French Open and US Open last year.

Sharan has been with a multitude of partners since splitting with Artem Sitak in February last year. Before partnering up with Zelenay in November, Sharan partnered up with 7 different players, including India’s Sriram Balaji, with whom he had his best result last year, reaching the final of a Challenger tournament in Czech Republic in September.

Ankita Raina’s dream Grand Slam debut was cut short as the wildcard Aussie opponents proved to be too good for her and her Romanian partner.

The first set was a lot more competitive than the second, with Raina and Buzarenscu showing their process and skill when it mattered most. They fought back after going 0-3 down in the first and created chances of their own.

Despite having a better first serve percentage than their opponents (68% to 63%) and serving three fewer double faults, the Aussies ended up powering their way to victory, serving up a bagel in the second set.

With 24 winners, Woolcock and Gadecki hit almost thrice the winners than their opponents, who had just 9 throughout the game. The Aussies also converted the chances they got, winning 5 out of the 12 break points they had. On the other hand, the unseeded Indo-Romanian pair won just 1 out of the 8 break opportunities they had.

Raina and Buzarnescu will also be disappointed with their serve, winning just 44% of the points on their first serve throughout the match.

Despite the loss, Raina will hold her head up high, having made a Grand Slam debut after toiling hard for many years. Just a few weeks ago, she lost a closely contested match in the final round of the qualifying tournament for the Australian Open, losing to Serbian teen Olga Danilovic. However, Tennis Australia flew her to Melbourne as one of six alternate players in a bid to get a spot in the draw.

With Sharan and Raina’s loss, India’s hopes in the men’s and women’s doubles came to an end. Rohan Bopanna remains the lone Indian left standing in the tournament as he prepares for his mixed doubles first round encounter alongside Duan Yingying of China. However, they will have their task cut out as they are up against multiple Grand Slam winners in Jamie Murray and Bethanie Mattek-Sands