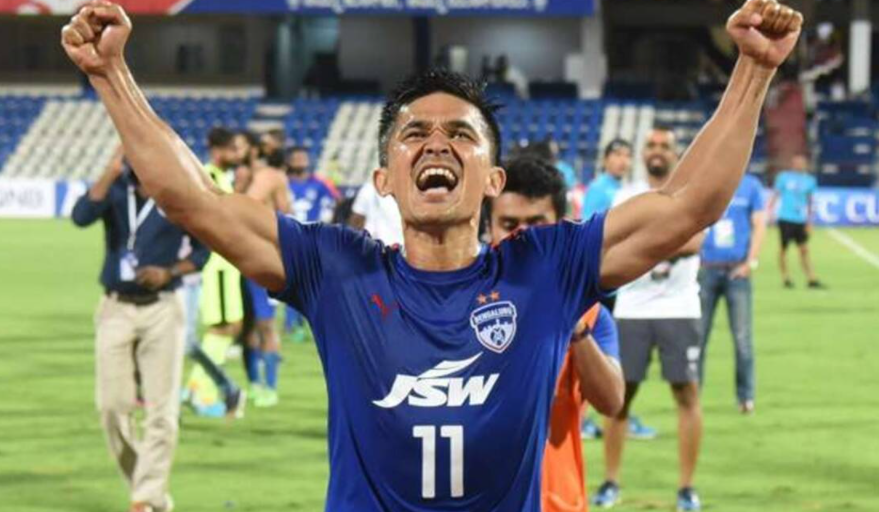 Sunil Chhetri is currently the second-highest international goalscorer among active players just behind Portugal’s Cristiano Ronaldo with 72 strikes from 115 matches.

India captain Sunil Chhetri was on Saturday named among 13 strikers for the fans to pick the all-time best three in the AFC Cup, the continent’s second-tier club competition.

His best achievement was to captain Bengaluru FC to a runners-up finish in the 2016 AFC Cup, losing to Air Force Club of Iraq in the final.

“An iconic figure of the modern Indian game, and a player whose 72 national team goals have given him an international profile, Sunil Chhetri has also regularly shown his ample quality on the continental club stage in the AFC Cup,” the AFC said on its website.

“Despite not appearing in the competition until his late twenties, Chhetri’s impact has lasted the best part of a decade.

“He captained Bengaluru to the 2016 final, his personal high point coming when he scored twice in a classic semi-final performance to eliminate defending champions Johor Darul Ta’zim.”

A host of top strikers from different countries, including Maldives legend Ali Ashfaq, made up the 13 nominations out of whom the fans will choose three strikers through a poll via internet.

“Three places remain in our All-time AFC Cup XI, with some of Asian football’s most iconic goal scorers to vie for a place in our fans’ dream selection.

“Football lovers from every corner of Asia have selected a goalkeeper, three defenders and a four-man midfield in previous weeks, now it’s time to crown the tournament’s greatest ever forwards, with countless worthy contenders to choose from,” the AFC said.

With a staggering 344 AFC Cup goals between them, the 13 nominated strikers hailed from Europe, Africa, South America, and of course Asia.